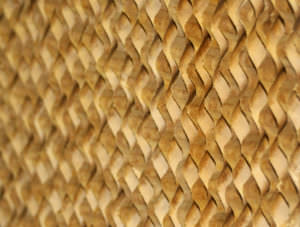 Today Kuul evaporative media offers three lines of rigid evaporative media designed for specific applications. Kuul Vitality is utilized primarily in the horticulture, poultry, and swine industries. Kuul Control is used in data centers, power gen, and HVAC systems. Kuul Comfort is exclusively made for usage in Portacool-branded portable evaporative coolers. But do you know how this came to be?

As we’ve recently noted, Portacool, LLC is celebrating its 30th anniversary this year. While the company was founded in 1990, it wasn’t until 1998 that Portacool began installing its own evaporative media in its products after nearly two years of research and development. 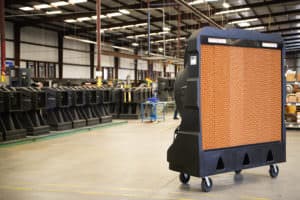 Amidst continued growth, expansion to a new location and a revamped roto-molding process in the mid-1990s, Portacool founders James Campbell and Fred Wulf decided to push the company a little further. Throughout the first six years of the company’s existence, Portacool had been purchasing all of its evaporative media from another company. The team was faced with constant supply chain issues and they decided it was time to take matters, and media, into their own hands.

Originally named ‘Project X’, the initiative was a massive undertaking, both physically and mentally. Portacool assembled a specialized team to focus on the development of evaporative media and the company ended up expanding and moving into a new building. In fact, one member of the team recalls that one group was assembling the parts for the evaporative media machinery on one end of the building while another group was assembling the roof on the other side. Both the Portacool plant building and the first piece of evaporative media were completed towards the end of 1996.

Developing the evaporative media was a lot of trial and error work to get a product that met the team’s standards. They would try different pieces of machinery, which usually meant waiting for parts to get delivered, in order to get it right. After a year of effort and perfecting their work, the Portacool team produced a product with the intended quality and effectiveness that they could sell to owners with fixed evaporative cooling systems, such as poultry houses and greenhouses.

Once they perfected the process, production never slowed down. Portacool started testing its evaporative media in real-time against competitors through air testing, sampling and cooling drops, etc. They worked with suppliers to make tweaks here and there with paper, glue, and the manufacturing process to continue to improve the product. And in 1998, they made the decision to put their own evaporative media in their portable evaporative coolers. Up until this point, they were still purchasing media for their portable products.

In the late 1990s, Portacool switched completely to using its own rigid evaporative media for all products, breaking from the company they previously purchased from. What became known as “KÜÜL Pads” began to make a name for itself at major poultry shows and other industry events. In fact, Portacool had to increase to four production lines to keep up with the demand in sales.

The team never looked back. In 2017, the brand was re-branded as Kuul evaporative media and continues to grow by leaps and bounds.