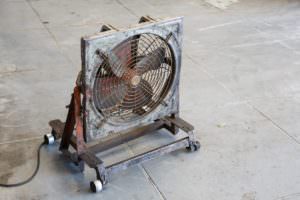 Best Shop Fans for My Garage

If you’re working in your garage, you know it can get unbearably hot. Summertime heat adds to the heat generated by your tools, and it becomes hard to focus on working. You have to take numerous breaks and you have to drink a lot of water, and even that likely doesn’t keep you from making mistakes because of the heat.

To avoid this, you might want to cool your garage down with a shop fan. Here are some of the best shop fans to consider for your garage.

Everybody loves this fan, and there’s a lot to love about it. First, it’s got three speeds, which lets you control the airflow up to nearly 3500 cubic feet per minute (cfm). You can mount it on the wall or put it on the floor, and it converts between the two configurations with ease. This Lasko fan doesn’t oscillate, but it does tilt to help you direct the airflow. It’s a sturdy and simple machine with a relatively low cost: generally available for under $100.

This is a good option if you’re looking for a slightly larger fan and don’t need a wall mount. It has only two speeds, but its 24” blades mean it can drive significantly more air. Like the Lasko, it doesn’t oscillate, but it has a tilting feature that lets you direct the air where you want it. It’s slightly more expensive, but it’s a good step up if you’re looking for a little more airflow.

If you’re looking for a fan you can mount on the wall in your shop or dangle from the ceiling, the Air King 9020 is a good choice. It has a sturdy connection which lets it become a permanent feature of your garage for years to come. It’s a 20-inch fan and can move nearly 3,700 cfm at its highest power setting. It toggles between the fan’s three speeds with a simple pull cord. While it doesn’t oscillate, it can rotate and pivot to let the air current reach any angle from where it’s mounted.

Are you looking for a fan that can work where you don’t have outlets without running another extension cord across your workspace? Then you should consider the Ryobi P3320, which has the distinction of being battery powered. It can run for about five hours off a single charge. Though it’s a relatively small fan that’s not especially powerful, it can help as task-specific cooling for someone. It doesn’t come with the battery, but it’s compatible with the standard Ryobi 18V battery that you might have a few of in your shop already.

Is a Fan What You Really Want? 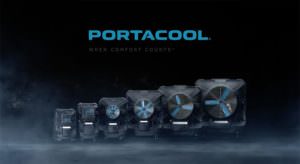 If you want to be cooler in your garage, it’s understandable that your first thought might be a fan. However, there are many reasons to move up to an evaporative cooler instead. Most importantly, fans don’t truly cool down the air. They just move the hot air around, and by the time temperatures reach about 95° F, that’s no longer effective – except for evaporating sweat. Even this doesn’t work very well if you are wearing coveralls and smeared in grease: a fan needs open skin to make a difference.

Evaporative coolers for the garage can actually drop the temperature by as much as 30° F with a single pass. This helps you get the garage cool and keep it cool, no matter your working conditions.

Plus, a Portacool can easily move as much or more air than these typical garage fans. You’ll get more airflow and cooler air at the same time, easily justifying the cost of upgrading to a Portacool. And Portacools have been made in the USA for more than 30 years.

To get yourself a Portacool, visit a local or online retailer today.